In Bazaar for Agile Teams, we completed an iteration, and our trunk branch's history looks like this: 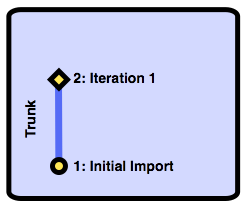 Tag
A name associated with a revision.

Now that we have a completed iteration and a handful of features, we're going to release it to our customers. It would be helpful if we could remember that our first release was revision 2. Bazaar lets you assign arbitrary names to revisions called tags. To assign a name to revision 2, we use the bzr tag command:

We've tagged revision 2 as "release-1". As you can see in the call to bzr log, we can use a tag in place of a revision number in Bazaar commands. Also, you can see that the tag now shows up as part of the log for revision 2. Tagging is very useful to mark which revision of a project was released, but you can attach any meaningful names you'd like to any revision.

You can use the bzr tags command to see a complete list of tags:

Remember that every revision has a unique revision identifier that can be used to identify revisions across branches. When we add a tag to a revision, we're really tagging the unique identifier.

As the team keeps working, they're going to land more revisions in the trunk. 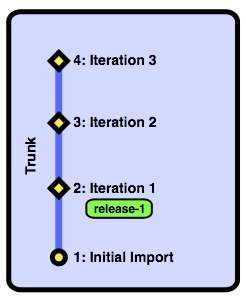 This approach is fine for ongoing development, but what if there's a bug in the released version of the product? We could just wait until the next planned release, but it would be better to fix the released version immediately. To accomplish this, we need more than just a tag, we need a release branch. 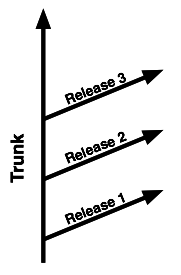 One way to model this is to always do forward development in the trunk branch, and fork off release branches. Depending on your project you might have to maintain multiple release branches or maintain a single "stable" branch which represents the current release.

If we had to fix a critical problem the released version of our sample project, we'd create a new brach from revision release-1 with the command bzr branch -r release-1 stable. Then we'd have the following two branches: 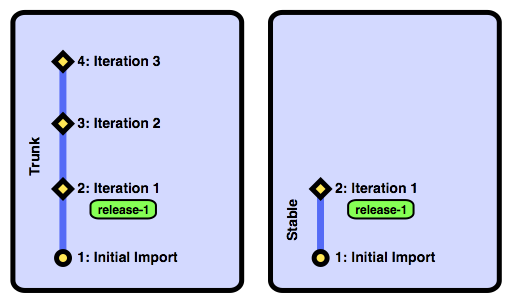 Now we have a stable branch that reflects what's been released. We can fix critical bugs in this branch and release the fixed code to customers without waiting for development to catch up. Let's see what this looks like after we fix two critical bugs and release again. 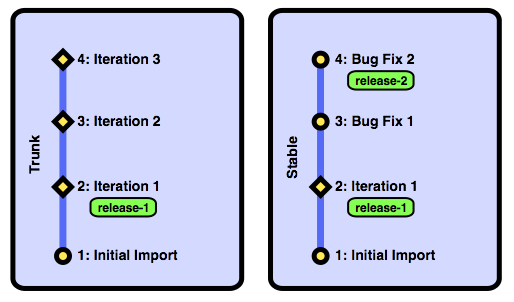 We've fixed the critical bugs in the stable branch and we now have a new tag showing which revision shipped. While this is great for the customers, we have a new problem— the fixes aren't in the trunk! That means that people who are working off of trunk aren't building their new revisions on top of the fixes, and the next time we release from the trunk branch, we'll lose the fixes. The answer to this problem is to merge changes from the stable branch into the trunk branch. After committing the merge, this is what trunk looks like: 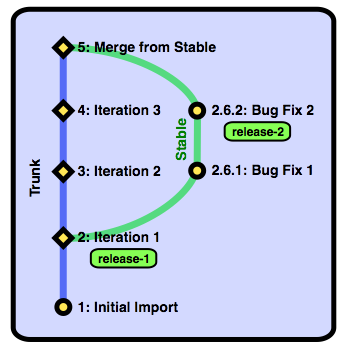 The fixes have been incorporated into the trunk branch, so everyone working from trunk will get them. The next time we release from trunk, the fixes will be there. And you can see how the tag "release-2" can still retrieve the state of the code from the second release.

Fixing a bug in the branch where it occured then merging back into your trunk is called a Daggy Fix.

Bazaar is flexible enough to manage a handful of branches needed by a single team and to handle the larger picture in an organization that might have multiple teams: 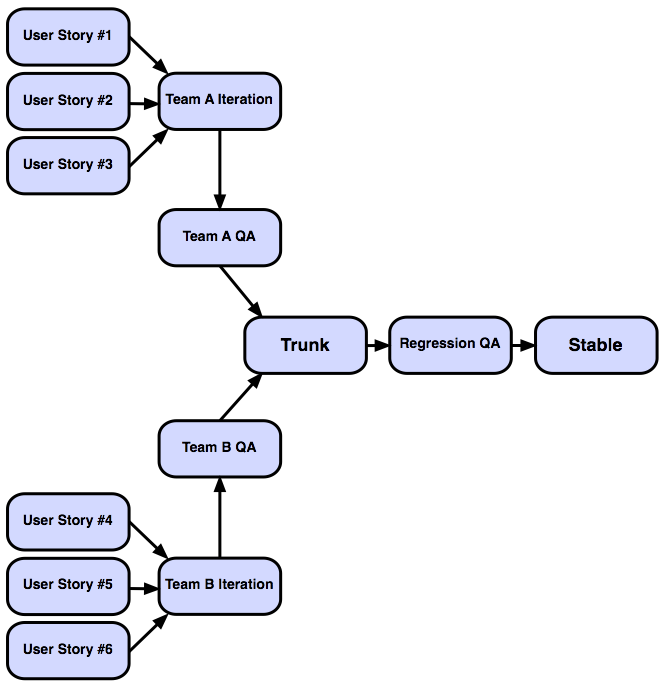 You can use as many or as few branches as needed to model your development pipeline.

When working alone, in informal groups, or on agile teams, developers usually have commit rights to the team's shared branch. However, in larger organizations or on projects where there are a lot of people submitting patches and a handful of project maintainers, you might want to use gatekeepers.

Gatekeeper
A nominated person or piece of software that has write access to a key branch.

The simplest way of implementing a gatekeeper process is to allow developers to mirror personal branches to a server, then the gatekeeper could merge their work into an upstream branch.

In some cases, developers might not have any write access at all, even to push copies of their work to a remote mirror where a gatekeeper could inspect it.

bzr send
Creates a merge directive that can be sent to a gatekeeper.

In this case, developers could use the bzr send command to generate a merge directive file with all their changes and mail it to a project's gatekeeper. A merge directive is sort of like a patch file except that it contains historical information instead of just the latest changes.

In Branching Zen, we were collaborating with Charlie on a cake recipe. Let's say Charlie only had read access to our recipe branch and he wanted to make two more changes:

Since he doesn't have write access to the recipe repository, he can call bzr send to email us a merge-directive.

When we get Charlie's email, we'll apply his merge directive file to our branch with bzr merge:

One last option with the gatekeeper approach is to use an automated system rather than a human being to serve as the gatekeeper. Since we can use bzr send to generate merge directives, it's easy enough to make a process that will apply these changes for us. For more information on this approach, see Bazaar's documentation on gatekeepers and check out Patch Queue Manager, which is an automated gatekeeper for Bazaar.

You can use Bazaar to manage your entire development pipeline regardless of how simple or sophisticated it may be. In this part of the tutorial we learned how to:

Back
Next: Tips and Tricks
Next